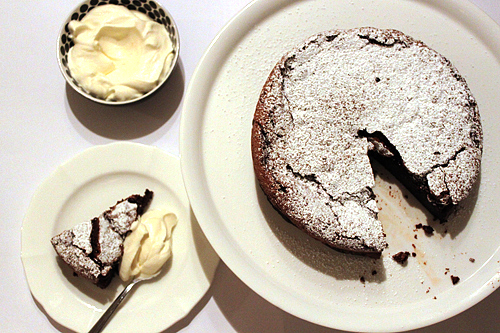 I was so disappointed in myself recently.  I had a real dumb moment thanks to rushing a recipe.  I wanted to make a cake before dinner, and with trying to do too much in one day I ended up ruining a perfectly good recipe.

The story goes like this.  I got home from the movies in the afternoon and decided to make a quick cake before heading to my parents for Monday night family dinner.  I had a couple of hours so I thought “no biggie”.  I found a great chocolate cake recipe in Neil Perry’s book The Food I Love, had a quick glance, then rushed to the shops to get some missing ingredients.  I realised I needed a couple of extra bowls, so popped over to Mum’s on the way home.  Got home, ok great, I have half an hour to get it into the oven so it’s done by 7 and I can take it to dinner.  Start making the cake, wow, lots of steps.  Look at the clock and I have 5 minutes left.  Crap.  Ok, keep going.  Eventually I get the cake into the oven in 40 minutes.  I call mum and let her know I’ll be about 10 minutes late.  Cake is supposed to be ready by 7, but I go to check it and a skewer comes out wet.  The cake is NO WHERE NEAR DONE.
Skip to the end - time runs out and the cakes not cooked, so I turn the oven off and leave.  I was furious.  I was in the worst mood - a bad dinner guest that’s for sure.
This is what really happened.  The cake needs to be cooked in a bain-marie.  That’s no problem, but what I failed to think about was NOT using a cake tin with a removable base.  The reason the skewer came out wet is the cake had absorbed all the water in the bain-marie, making it soggy.  It was cooked, just incredibly wet.
The top part however was lovely.  It was crisp like a meringue, and sweet, and moist until it hit the bottom puddle.  The cake had so much potential!  And the batter, oh god the batter - it was amazing!  It was a tricky cake to make with so many steps - I ended up using four mixing bowls.  And it would have been completely worth it had I thought about the recipe properly before rushing into it.
Moral of the story – read a recipe carefully before plunging in.  And when attempting to make this cake, use a completely sealed cake tin.

Lucky for me, over the next day, the cake had absorbed all the water evenly that it became a pudding.  A quick warming in the microwave and a dollop of cream and the cake was beautiful.  So not the biggest failure after all...

Set a metal bowl over a simmering pot of water and slowly melt the chocolate.  Be careful not to let the water hit the bowl.  When melted, set aside to cool.
In a large bowl, add the egg yolks, Cointreau and two-thirds (100g) of the sugar and beat until pale and creamy.  Add the chocolate and stir until combined, then slowly add half the cream (150ml) and stir.
In another bowl, whip the remaining cream (150ml) and set aside.
In a very clean bowl, add the egg whites and beat until soft peaks form.  Slowly add the remaining sugar (50g) and continue beating until firm.
Fold the whipped cream into the chocolate mixture, then fold in the egg whites.
Pour the mixture into the cake tin, and place the tin in a bain-marie with 1 inch of hot water.  Any baking tray or oven proof dish will work as a bain-marie.  Bake for 45 minutes, then reduce the temperature to 150°C and bake for a further 45 minutes.  When done, turn the oven off and let the cake rest for 20 minutes in the oven.  Gently go around the edges of the tin with a knife then turn out onto a plate.
Before serving, sprinkle the cake with the icing sugar.  Serve with whipped cream.
Serves 10.